UNECE supports modernization of seed-potato cultivation, quality control and certification in the Russian Federation and CIS

UNECE supports modernization of seed-potato cultivation, quality control and certification in the Russian Federation and CIS 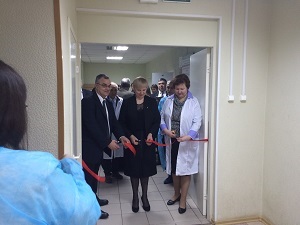 With the official opening of a modern in vitro laboratory for seed potato cultivation, quality control and virus elimination, at Shushari, near Sankt Petersburg, on 26 January, UNECE finalized a multiyear project financed by the Russian Federation that significantly raised the quality of seed potato production and its alignment with UNECE standards. Ms Elena Pavlova, chief of the Leningrad region branch of the Russian Agricultural Centre, thanked UNECE for their support, which included not only the provision of new equipment for in vitro laboratory, but also methodological assistance, and training of staff. Russian experts have made serious efforts to implement the UNECE quality standards for seed potatoes, and this project has contributed to quality control, crucial for the efficiency of implementation. Ms Tatiana Agapova, Deputy President of the agro-industrial and fishing complex of Leningrad District, officially opened the laboratory, noting her high appreciation of UNECE’s assistance and expertise provided under the project, and the importance of UNECE’s international quality standards for seed potatoes.

This is the third laboratory built under the project, after one in Vladikavkaz and another one at the Lorkh Institute for seed quality control near Moscow. The implementation of the project benefited from a collaboration agreement between UNECE and the world-renowned Swiss agricultural research station Agroscope Changins-Wädenswil (ACW) for raising the standard of cultivation, quality control and certification of seed potatoes in the Russian Federation and other CIS countries.

These laboratories largely increased the efficiency of quality of seed potato production in Russia, along the whole chain – from the source material to large scale production and  commercialization of potatoes. Only such first-rate controls allow UN standards for quality and virus elimination for seed potatoes to be implemented with strong effect on production efficiency and food security said Dr Linh Lê, Agroscope expert who designed and oversaw the construction of the three laboratories as UNECE consultant.

The Vladikavkaz laboratory, managed by private business now, produces in vitro  150,000 microplants per year for its own potato production (through its firm Fat-Agro) and 100,000 microplants for other clients. This laboratory produces the material for 800,000 mini-tubers protected from insects, of which 500,000 are used by Fat-Agro, and 300,000 are sold on the market, thus making minitubers a separate item on the market. 50,000 microtubers are produced using Dr. Lê’s “container” technology implemented under the project.

Equipment provided under the project to the Lorkh institute allowed for a substantive increase of the quality of potato production in Russia, as attested by top international research centres. Material produced in vitro at the Lorkh institute is sold to over 50 enterprises producing potatoes in the Russian Federation.

The laboratories developed by the project also support the use of innovative varieties of potato developed in Russia and highly demanded on the market. These new varieties of are in high demand, yet they need innovative processes of production of seed potatoes and marketing. This will be facilitated by the new methodologies adopted by the standardization and quality control laboratories developed under the project, said Ms Elena Pavlova. A seed-potato certification system, when in place, can boost the yield and prevent soil contamination. The UN thus helps create a sustainable system of high-yield potato cultivation.

Financed by the Russian Voluntary Contribution Fund, this project brought together growers, regional administration personnel, and quarantine and certification services, highlighting how UNECE’s support to countries can make difference in the field for tangible improvements contributing to sustainable development.