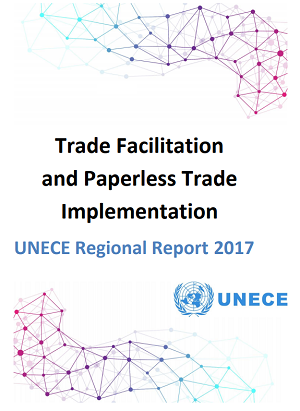 UNECE member States are progressing on almost all fronts of trade facilitation and paperless trade, a new report shows. The report, based on the Second Global Survey on Trade Facilitation and Paperless Trade 2017, was released on 9 December at a side event co-organized by the UN Regional Commissions in the context of the WTO Ministerial Conference in Buenos Aires, Argentina.

A key highlight of the survey results was the achievement of the Former Yugoslav Republic of Macedonia (FYROM), which despite being a transition economy, went above 81% of implementation, thanks to its recent reforms in access to trade information and stakeholder consultation as well as in electronic exchange of certificates.

A closer look at the report shows that the most-implemented (86%) measures were related to transparency of trade procedures and access to information. The most-implemented individual measure in this category included publication of existing import-export regulations on the internet. The formalities category, which deals with regulatory procedures like risk management, pre-arrival processing and more, was also well implemented at a rate of 78%. The Institutional arrangement category followed with 73% implementation. The paperless trade (68%) and cross-border paperless trade (46%) categories, which primarily assesses the automation of procedures and facilitation of electronic exchange of trade data, are in need of significant improvement. Some of the least implemented measures from these categories are electronic application for customs refunds and electronic exchange of certificates of origin or sanitary & phytosanitary conditions.

This year’s survey included a new set of measures, which attempted to gauge if trade facilitation reforms are inclusive, or not. These were trade facilitation for small and medium-sized enterprises (SMEs), agriculture, and women in trade. A limited analysis of the data received shows moderate implementation (above 60%) for measures related to agriculture and SMEs  but very low (17%) implementation related to women in trade, which warrants greater efforts from countries.