UNECE and OSCE train participants from Afghanistan, Kyrgyzstan and Tajikistan on cross-border trade and trade facilitation

UNECE and OSCE train participants from Afghanistan, Kyrgyzstan and Tajikistan on cross-border trade and trade facilitation 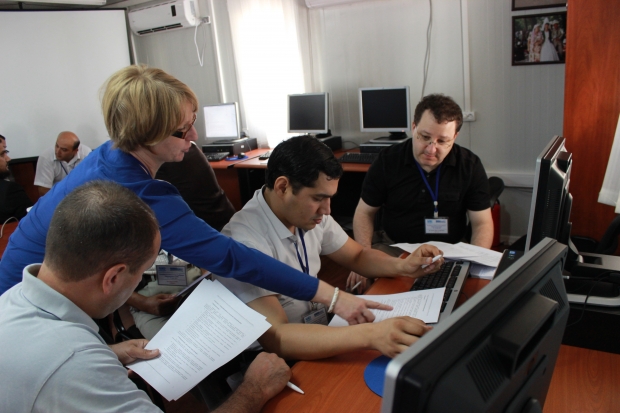 A three-day workshop for participants from Afghanistan, Kyrgyzstan and Tajikistan on simplifying and harmonizing procedures for international trade concluded at the OSCE Border Management Staff College in Dushanbe on 23 July. Its objective was to reduce trade costs, and boost commercial flows to the benefit of regional and international trade by supporting governments in their efforts to reduce delays at border crossings, and streamline, simplify and automate customs clearance, transit, import and export procedures.

Twenty-four representatives of trade and transport ministries, customs agencies, businesses and technical assistance and inspection bodies from the three countries participated in the workshop which was co-organized by the Office of the Co-ordinator of OSCE Economic and Environmental Activities and the UN Economic Commission for Europe (UNECE).

The workshop covered topics included in the UNECE Trade Facilitation Implementation Guide (TFIG) and the OSCE-UNECE Handbook of Best Practices at Border Crossings – A Trade and Transport Facilitation Perspective. Participants were provided with guidance particularly regarding the implementation of the recent World Trade Organization Trade Facilitation Agreement, and on developing a strategic approach to trade facilitation for trade and economic development.

“This course allows governmental and business sector representatives from Afghanistan, Kyrgyzstan and Tajikistan to increase their skills in trade facilitation and preparedness to implement international best practices in their daily work,” said George Sand, Economic Officer at the OSCE Office in Tajikistan. “Through such capacity-building events and other activities, the OSCE Office in Tajikistan continues to implement its mandate in addressing economic challenges to security in the country and in the region at large.”

Tom Butterly, Deputy Director of the Economic Co-operation, Trade, and Land Management Division at UNECE, said: “Participants were eager to speak about trade facilitation from their own counties and this was a rich learning experience for everyone. The participation of the private sector in the workshop contributed to its success, as trade facilitation is essentially a partnership between trade and government.”
Contacts:Tom Butterly
Deputy Director
Economic Cooperation, Trade, and Land Management Division
Email: tom.butterly@unece.org