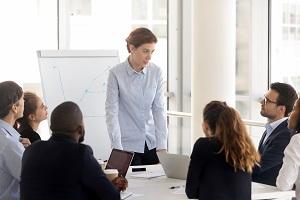 On the occasion of the International Women’s Day, I would like to pay tribute to all women leaders, and all women and men, girls and boys, who are empowering women and girls to build a better future for all!

The theme of this year’s International Women’s Day is “Women in leadership: Achieving an equal future in a COVID-19 world.” Dealing with the pandemic and its continued impact worldwide has exposed governments, the private sector, civil society organizations, international organizations and financial institutions to unprecedented challenges, requiring tough decisions, for both immediate pandemic responses and recovery strategies. Women leaders have navigated through the complexity of this process with determination, taking decisive action to protect the people of their countries, communities and companies.

Women from the UNECE region are Heads of State or Governments, members of parliament; they are leading central banks and international financial institutions, ministries of finance, economy, social affairs, task forces for COVID-19 immediate response, to name a few critical institutions shaping political and economic decision-making.  At the outbreak of the pandemic, women Heads of State or Government, such as in Denmark, Finland, Germany, Iceland and Slovakia rapidly decided upon and implemented measures as a first response to contain the spread of the virus. The confinement measures, social distancing and widespread vaccination  were accompanied by transparent and compassionate communication of public health information, with more women participating in the daily briefings and news about the pandemic. Women in many countries led medical groups and research on vaccines and medicines to fight the pandemic, and managed the day-to-day care of their cities, such as the mayors of Barcelona, Dublin and Paris, to name just a few. This must surely dispel any lingering doubt about the ability of women to fulfil such roles.

The gender parity achieved in expert groups and decision-making bodies set up to support the immediate COVID-19 response in several UNECE member States is another example worth following, for it is not women nor men per se, but the diversity of perspectives and expertise that is needed to address complex challenges.

To seize this crisis as a turning point, and as a catalyst for collective decision-making that benefits all, achieving gender-balance in leadership must be a priority.   But we still have a long way to go: in most countries, women are the minority in decision-making positions, in parliaments and executive boards. The proportion of female parliamentarians varies across the UNECE region, with the greatest shares in the Scandinavian countries, followed by Western Europe. Countries such as Sweden, Finland, Norway and Switzerland each have more than 40 per cent of women among members of parliament. But women are in a minority in local governments across the UNECE region, reaching 29 per cent on average, with only four countries at the threshold of 40 per cent. I encourage policy-makers and civil society throughout the region to make the most of the comparable sex-disaggregated data and gender indicators in the UNECE Statistical database to monitor progress and inform further efforts towards achieving gender parity.

We have no time to lose. Gender inequalities are pervasive and exacerbated by crises and the austerity measures that usually follow. Since the outbreak of COVID-19, the role of women in the economy has taken on even greater importance, as women support essential everyday activities and on average devote more time than before the pandemic to take care of their families, of the sick in hospitals, of older persons and people with disabilities in the community, and juggling home office and household chores. As a consequence, the gender gap in unpaid work is dramatically widening. In Eastern Europe and Central Asia, 70 per cent of women have reported to have spent more time on at least one unpaid domestic work activity compared to 59 per cent of men with huge variations across countries, according to the rapid assessments on the impact of COVID-19 on women’s and men’s lives and likelihoods, carried out by UN Women. As a consequence, the gender gap in unpaid work is dramatically widening. This also calls for the wide adoption of policies promoting work-family life balance. We need to address all these persistent inequalities through advocacy, sharing knowledge and experience across communities, countries and regions in order to find innovative solutions and implement gender-transformative policies and measures. The UN Regional Commissions, all five headed by women, are collaborating in the search for such policies and initiatives to address structural barriers to women’s empowerment with a focus on the care economy in the COVID-19 response, and to build resilience against future shocks.

More than a quarter of a decade since the adoption of the Beijing Platform for Action, the most visionary agenda for women’s rights and the empowerment of women, I renew my call for bold action to accelerate and promote women’s full participation in decision-making at all levels as an important step towards gender equality and women’s empowerment. As part of these efforts, I encourage the increased use of affirmative action policies such as quotas to get more female electoral candidates, and insistence on minimum proportions of women on boards. Today, as we risk losing hard-won gains due to the disproportionate impact of the COVID-19 pandemic on women, it is a matter of urgency to step up and act NOW. Our recovery from this crisis depends on it. Together, let us lead by example.