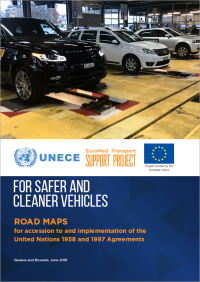 The number of road traffic crashes remains unacceptably high representing a leading cause of death and injury around the world, killing more than 1.3 million people and injuring as many as50 million people a year, with 90 per cent of those casualties oc-curring in developing countries. Every country and region of the world is implemen-ting measures to address this problem. It is worth mentioning the UN Global Plan for the Decade of Action for Road Safety 2011-2020that is based in 5 pillars, of which Pillar 3 is dedicated to safer vehicles. The plan recommends to UN Member States to apply the vehicle regulations developed by the World Forum WP.29.

To this end, the EuroMed Transport Support Project is engaged, interalia, in supporting Partner countries in the region accede and implement the 1958 and 1997 Agreements on UN Vehicle Regulations and Rules annexed to them. Although EuroMed countries have a vehicle type approval (VTA) and Periodical Techni-cal Inspection (PTI) systems, such systems are far from those in force in Europe. The implementation of Vehicle Regulations related activities in the region, revealed that through accession to and implementation of the 1958 and 1997 Agreements, vehicles safety will be increased considerably in all the EuroMed Partner countries. However, the main issue for them remains, how to prepare for accession to and implementation of these Agreements so that they can benefit from their provisions, ensuring that safer and less polluting vehicles are used in their countries, both those newly registered but also those already in circulation.

The present document, prepared jointly by UNECE and EuroMed TSP, presents the main steps and several sub-steps that the EuroMed Partner countries, and other countries worldwide wishing to accede and fully implement the 1958 and 1997 Agreements, have to follow (the Road Map).