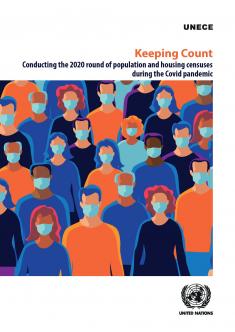 When the Covid-19 pandemic broke out in March 2020, preparations for the 2020 round of population and housing censuses were well underway in countries across the UNECE region: some were already in the field, while the majority were in the advanced stages of planning for a 2021 census.
The impacts of the pandemic on census-taking have been wide ranging; from the need for social distancing in countries using in-person census enumeration, to conceptual challenges such as correctly measuring place of work and commute to work when many people are temporarily obliged to work from home. Even those countries where a census is conducted using population registers rather than questionnaires have faced delays and possible inaccuracies in their source data.
Census offices across the UNECE region have had to deal with these and many other challenges over the course of 2020, and several have opted to delay their census as a result. This publication looks at the impacts on all aspects of censuses, from data collection to dissemination, based on reports from member States. Some lessons learned are offered to guide countries toward more resilient census operations in the future, including proposed adaptations to the next edition of the Conference of European Statisticians Recommendations on Population and Housing Censuses which will guide countries in the 2030 census round.