Download here the PDF version of this publication.EXECUTIVE SUMMARY 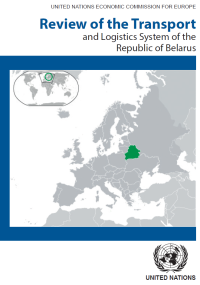 The current state of development of the world economy is characterized by sharp competition for spheres of influence in major commodity markets. Economic globalization leads to a rapid growth of trade flows between Europe and Asia. The growing economies of China, Japan as well as developed European countries are consuming more and more raw materials and resources. In the meantime, they produce modern high-tech mechanical engineering products for which developing economies of China, Russia, Kazakhstan, Belarus, Ukraine and other former Soviet Republics have huge needs. We can observe rapid growth of foreign trade between the above mentioned countries, and hence the growth of trade flows. At the same time, the dynamic development of integration processes taking place within the Customs Union of Belarus, Russia and Kazakhstan, are increasing the possibilities of the Republic of Belarus to develop logistics and freight transit in the European and Asian direction.The location of the Republic of Belarus in the center of the European continent allows it to become a connecting link between Europe and Asia and to provide smooth cargo flows via major transport corridors that pass through its territory. This is well understood in the country and the conditions for the transit of goods through its territory are constantly improving. The Government carries out permanent systemic work on increasing transit freight flows through Belarus, promoting the growth of commodity exchange between the EU and Asian countries.
The abolition of transport and other agreed  controls on domestic  inter-state  borders  of the Customs Union member countries since 2011 has increased the appeal of transit through Belarus. This in its turn increased the speed of vehicles in transit. The result of implementing this measure is that the number of transit trips of trucks that belong to foreign carriers has increased by more than 21 percent.The concept of the development of a transport space adopted by the Eurasian Economic Community provides the conditions for creating supply chains and logistics terminals in the territory from Almaty to Brest. The strateg y of the creation and development of the EurAsEC logistics centers is based on the provisions of the Agreement among the EurAsEC member states on the formation of the EurAsEC Transport Union and the Concept of the common EurAsEC transport space. The strateg y covers the period until 2020. It aims to unite the practical efforts of community members for the joint implementation of the EurAsEC objectives in transport sector.An effective scheme of logistics centers and logistic services need to be developed according to the requirements of modern business, so that the logistics sector in Belarus works in an efficient way. It is also essential to establish cooperation with key players in the logistics market of Western countries as well as with partners in the Common Economic Space and Ukraine. Moreover, it is quite important to master new multimodal freight schemes and develop the appropriate infrastructure for all participants in the logistic system. Only an overall solution of these questions will guarantee a stable and efficient operation of the country’s logistics sector.In 2007, the World Bank ranked Belarus at 74th place out of 142 countries. Again, in 2012, Belarus was ranked at 91st place out of 155 countries. In general, the level of logistics development in Belarus is lower than in Latvia, Lithuania, Kazakhstan, but is slightly higher than in Russia, which ranks at 95th place. The leadership of the country is determined to implement policies that would allow Belarus to rise to between 50th and 60th place in the ranking.In order to address objectives of the project, research in this study covered:Based on findings and results of this analysis, some recommendations will be provided regarding further development of the logistics sector in Belarus and its integration into the European logistics system.