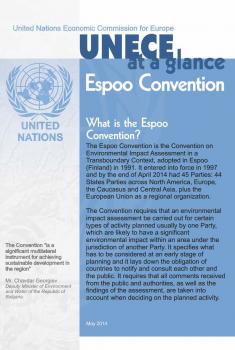 Available in English, and in Russian.

The Espoo (EIA) Convention sets out the obligations of Parties to assess the environmental impact of certain activities at an early stage of planning. It also lays down the general obligation of States to notify and consult each other on all major projects under consideration that are likely to have a significant adverse environmental impact across boundaries (see some examples).

The sixth session of the Meeting of the Parties to the Convention took place in Geneva in June 2014.

First amendment to the Convention was adopted in 2001. Once in force (see status), it will open the Convention to accession upon approval by UN Member States that are not members of the UNECE

Second amendment to the Convention was adopted in 2004. Once in force (see status), it will