Formalizing the Informal: Challenges and Opportunities of Informal Settlements in South-East Europe 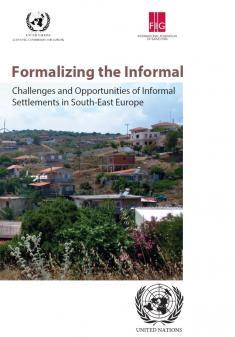 The publication examines the causes of informal housing development in South-East Europe and assesses the Government’s policies to address this issue.

Over the last 25 years, informal settlements have become an increasingly important and urgent matter in the region. At an international conference in 2007, it was estimated that more than 50 million people lived in informal settlements in 20 member States of the UNECE. In 2009, the ECE Committee on Housing and Land Management published a first study on informal settlements: Self-Made Cities: In Search of Sustainable Solutions for Informal Settlements. This publication continues the discussion opened by the previous study. This report, Formalizing the Informal: Challenges and Opportunities of Informal Settlements in South-East Europe examines the causes of informal housing development in five countries of South-Eastern Europe – Albania, the Republic of Cyprus, Greece, Montenegro and the former Yugoslav Republic of Macedonia, and assesses the governments’ policies to address this challenge. Based on this assessment, the study makes policy recommendations to these five countries’ governments. It also contains lessons learned and best practices that can be applied throughout the UNECE region.EnglishSummary (French)