8 billion reasons to redouble our efforts 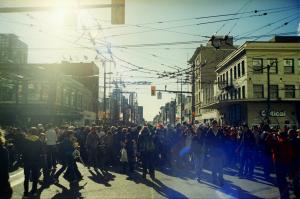 Today, according to United Nations estimates, the population of the world will for the first time reach the 8 billion mark.

Just 48 years ago, in 1974, our planet was home to four billion people. In less than half a century this has doubled, having passed through the milestones of five billion in 1987; six billion in 1999; and seven billion in 2011.

Some will undoubtedly seize this moment to sound alarm bells about the impacts of burgeoning populations on the environment, the climate and our natural resources. Others will see it as an opportunity to celebrate the astonishing achievements of humanity that have enabled us to save the lives of babies and children, and lengthen the lives of adults in such a remarkable way over the past half century.

Here in the UNECE region I wish to mark this day of 8 billion in a different way—because neither of these extremes is helpful for guiding us into a sustainable future.

Alarmist denouncements of rapid population growth miss the point. We all know by now that it is not merely the numbers of people, but how our societies operate and interact with our environment, that determines the impact we have. The ways that we make use of natural resources, the energy intensity of our industries and lifestyles, and the balance between rich and poor, young and old, all mediate the relationship between population and environment.

Yet the opposite extreme, a self-congratulatory celebration of human achievement, doesn’t seem right when so many people across the world are struggling. Right now our region is torn apart by war, energy crises, economic woes, heatwaves, droughts, inequalities and discrimination. We can’t claim complacently that we have things under control. Yes, we have made huge strides in reducing infant and maternal mortality and in preventing and curing communicable and non-communicable diseases that used to claim so many lives, and it is for these reasons that the world’s population has grown so much. But this is far from the whole story.

So on this day of 8 billion—which in the UNECE region is a day of around 1.3 billion—I wish to recall that each person alive has a story to tell, a life lived or still ahead of them, with skills and experiences, needs and wishes, ideas and potential. And it is our duty to do everything in our power to ensure that this potential is fulfilled. This means protecting the rights and freedoms of every individual to live in a peaceful, healthy and prosperous world.

It’s not just about population growth

While the 8 billion milestone draws attention to global questions about population growth, here in the UNECE region the challenges and opportunities of demographic change are rather different from other world regions. In fact, while the global population increased by 22 per cent between 2000 and 2020, the population of the UNECE region grew by only 8 per cent in that same period, from 1.2 to 1.3 billion.

Consequently, for most of the countries in our region, population growth is far from the main concern. Rather, many countries of the UNECE region face significant challenges due to population ageing, a phenomenon in which our region is well ahead of other parts of the world. And in some areas demographic change brings with it the prospect of de-population, eventually making it difficult to provide the full range of public services for individuals living there. Designing and enacting smart, sustainable policies to address population decline is indispensable, and the UNECE region has the potential to be a global frontrunner in this endeavour.

It’s well known that population ageing can bring with it a number of economic and social challenges: financing health care and social security systems, testing the limits of social cohesion and the sense of equity between generations. But more and more evidence now suggests not only that these challenges can be overcome, but that population ageing has the potential to increase economic growth when properly harnessed, with age-friendly policies which tap into the potential of older generations.

The crucial role of data

As I reflect on the implications of these demographic developments in our region, and on how we need to respond to them as we strive to fulfil the goals of the 2030 Agenda for Sustainable Development, one things strikes me again and again. All of these figures—the headline figure of 8 billion, the share of older people, the mortality and illness rates and the indicators we call on to help us assess development and impact—depend upon data.

We don’t really know, of course, precisely how many people share this Earth. But having a good estimate is crucial for so many reasons. We need to know the size of a population to calculate some of the most commonplace economic and social indicators, such as income per capita. Almost half (107 out of 231) of all the globally-agreed indicators for measuring progress towards the SDGs require population data. Some of them depend entirely on data collected via a population and housing census, the full count of all the people and dwellings which takes place in countries every ten years (or more often, in some).

Here at UNECE, we know just how important censuses are. The data they provide don’t just help to produce eye-catching news stories; they provide evidence to guide decisions in every area of life, from economic development, healthcare and education to transport infrastructure, housing, energy supply and waste disposal. Because of this, we support countries to conduct their censuses using the most modern and efficient means, and we work together to develop international standards for how censuses should be conducted.  We’re currently working with more than 120 experts from across the region to redevelop the regional census recommendations ready for the next census cycle, in 2030.

Heading into the future

On this landmark day, then, I have two messages. Numbers aren’t everything: what matters is how numbers fit into the full picture. But numbers are indispensable: without data we are flying blind. As we head onwards towards 9 billion and beyond, let us redouble our efforts—both to fulfil our promises to every one of those people, and to gather the data needed to ensure that our efforts are working.

Our region in figures