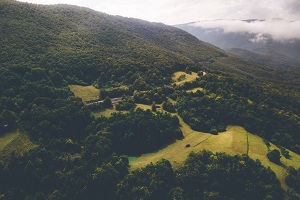 The world has lost around 420 million hectares of forest to other land uses since 1990, with an annual rate of deforestation estimated at 10 million hectares over the last five years, the Food and Agriculture Organization of the United Nations (FAO) said in its 2020 Global Forest Resources Assessment (FRA) report published this week. The report, whose preparation was supported by experts from the Joint UNECE/FAO Forestry and Timber Section, shows that on the contrary to global trends, forest area in the UNECE region has been increasing over the last three decades, up by 33.5 million hectares.

This does not mean deforestation did not take place: around 6.4 million hectares of forests have been converted to other land uses in UNECE countries since 1990. However, the UNECE region’s lost forest area has been compensated by forest expansion, which accounted for 39.9 million hectares in the same period. In general, this means that the UNECE region’s lost forest area accounts for a relatively small percentage of all forest lost to deforestation globally throughout the same period.

Three of the five countries with the biggest forest area in the world (the Russian Federation, Canada, the United States of America) belong to the UNECE region, and forests in these three countries amount for the vast majority (86 percent) of the region’s forests The UNECE region is characterized by a higher rate of forest cover (37 percent) and more area of forest per person (1.4 hectares) compared to average global values.

The FRA 2020 data also revealed that countries of the UNECE region are leading in sustainable forest management: almost 84 percent of all forests in the region, corresponding to around 1.4 billion hectares, are covered by long term management plans.

As a major biodiversity hub which hosts around 80 percent of the world’s terrestrial biodiversity, forests will play a key role in international efforts to prevent up to a million species from extinction. Nearly half of the world’s remaining 1.11 billion hectares of primary forests – that is, forests composed of native species in which there are no clearly visible indications of human activities and where the ecological processes have not been significantly disturbed – remain in the UNECE region.

Millions of families and households worldwide are dependent on wood and non-wood forest products for their subsistence, income and fuel, and around 30 percent of all forests are used for this purpose. Most of those forests are in the UNECE region: around 0.75 billion hectares of forest is estimated to be managed for this purpose.

The UNECE region alone accounts for 60% of global industrial roundwood removals (1.23 billion m3 of a global total of 2.03 in 2018) and 14% of wood fuel removals (263 million of 1.9 billion m3). Industrial roundwood is used for all purposes other than energy (from construction, furniture, cardboard, fence posts).

Insects, diseases and severe weather events damaged around 40 million hectares of forests in the same year, of out which 33 million hectares in UNECE countries. This includes the beetles infestation, which caused a tremendous damage to coniferous forests in Europe (spruce forests in central Europe) and North America over the past few decades.

UNECE Executive Secretary Ms. Olga Algayerova said: “These findings suggest that the UNECE region is on the right track when it comes to sustainable forest management, and many indicators suggest a lot of work has gone into increasing, protecting and managing forests in a sustainable way. However, they also highlight how fragile and exposed forest ecosystems are, in particular in the context of climate change, which underlines the need to continue and intensify these measures. UNECE is fully committed to support countries’ efforts as they plan their next steps for the forest sector”.