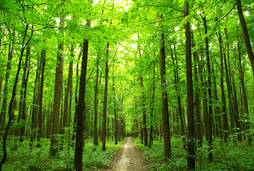 Depending on their characteristics and local circumstances, forests can play different roles in the carbon cycle, from net emitters to net sinks of carbon. Forests sequester carbon by capturing carbon dioxide from the atmosphere and transforming it into biomass through photosynthesis. Sequestered carbon is then accumulated in the form of biomass, deadwood, litter and in forest soils. Release of carbon from forest ecosystems results from natural processes (respiration and oxidation) as well as deliberate or unintended results of human activities (i.e. harvesting, fires, deforestation).  The contribution of forests to carbon cycles has to be evaluated taking also into account the use of harvested wood, e.g. wood products storing carbon for a certain period of time, or energy generation releasing carbon in the atmosphere. In cases where the net balance of carbon emissions by forests is negative, i.e. carbon sequestration prevails, forests contribute to mitigating carbon emissions by acting as both a carbon reservoir and a tool to sequester additional carbon. In cases when the net balance of carbon emissions is positive, forests contribute to enhancing greenhouse effect and climate change. Forests and their role in the carbon cycle are affected by changing climatic conditions. Evolutions in rainfall and temperature can have either damaging or beneficial impacts on forest health and productivity, which are very complex to predict. Depending on circumstances, climate change will either reduce or increase carbon sequestration into forests, which causes uncertainty about the extent to which the world’s forests will be able to contribute to climate change mitigation in the long term. Forest management activities have the potential to influence carbon sequestration by stimulating certain processes and mitigating impacts of negative factors. Forest ecosystems in the European Union play multiple significant roles, including carbon sequestration. It is estimated that the forest biomass in the EU27 countries contains 9.8 billion tons of carbon (tC). The total CO2 emissions of the EU27 countries in 2004 was 1.4 billion tons of carbon . This means that the amount of carbon emitted every year by the EU27 equals to nearly one-seventh of the carbon stored in the EU27 forests. As a result, the value placed on forests in the EU can be seen as a viable way of mitigating GHG emissions through carbon sinks and sequestration. In the UNECE region as a whole, the carbon stock in forest ecosystems is increasing. Since 1990, the total forest carbon stock in Europe increased by 2 billion tons, i.e. an average of 137 million tons of carbon per year. The main reasons for this increase are policies and legislations that ensure that wood removals do not exceed increment, as well as forest growth rates that have increased in many forest types. Forests and other wooded land in the UNECE countries cover nearly 1.9 billion hectares, located in North America, Europe (including territory of Russian Federation), Caucasus and central Asia . According to FAO’s Forest Resources Assesment, the total carbon content in forest ecosystems for the year 2005 was 638 Gt C (1 Gt C equals to 1 billion metric tons of carbon). Estimates by FAO show that forests in the UNECE region represent approximately 40 percent of all carbon contained in forests. An important feature that distinguishes the region’s carbon stock is a relatively high ratio of carbon stored in soils, nearly half of the total. In relative numbers, in 2005, North America had an estimated 118 tons of carbon stock per hectare (includes carbon in living biomass, dead wood, litter and soil). Europe had nearly 177 tons of carbon stock per hectare. A trend from 1990 to 2005 shows that many European countries and the U.S. reported significant total carbon stock increases. The trends show an increase of carbon stock in many countries of the UNECE region, and sustainably managed forests could continue to store even more carbon, thus contributing to climate change mitigation.