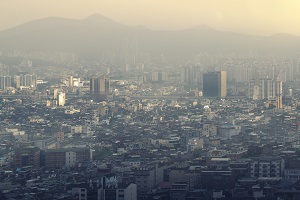 Air quality has become a key political issue in the Republic of Korea, prompting the Government to pass emergency measures and to invest heavily in the development of technologies to reduce fine dust pollution.

With 40 years of experience, the UNECE Convention on Long-range Transboundary Air Pollution (Air Convention) has become a model for other countries and regions seeking advice on best practices and measures to reduce air pollution.

To share its experiences in tackling the emissions of key air pollutants in the pan-European region through the work under the Air Convention, UNECE participated in the 2019 Clean Air International Forum, which took place in Suwon City, Republic of Korea on 19 and 20 September 2019.

The experience under the Convention has shown that the air pollution problem cannot be solved at the local or national level alone. Air pollution is a problem that transcends any boundaries and therefore requires an international response. Reducing emissions has to be tackled in a cooperative effort at all scales, the local, national, and importantly, the regional and global ones. Under the Convention, 51 countries of the UNECE region have been cooperating to achieve emissions reductions of a range of harmful substances of 30-80% since 1990 in Europe and 30-40% in North America.

An example of the successful cooperation under the Convention, the amended Gothenburg Protocol, covering multiple pollutants and its effects, will enter into force on 7 October 2019. The Protocol is an example of how reducing more classical air pollutants, such as Sulphur, and short-lived climate pollutants, such as black carbon, which is a major component of fine dust pollution, can be integrated into one instrument.

While the Convention is a regional instrument, Parties recognize that stronger cooperation with countries from outside the UNECE region is needed. The Convention will therefore launch a Global Forum for Cooperation at its 40th Anniversary Special High-Level Session, which will take place in December 2019. This will be an opportunity to further strengthen the national-regional-global linkages to tackle air pollution.