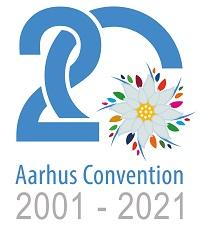 Back to MOP7-MOPP4 main page

The seventh session of the Meeting of the Parties to the Convention on Access to Information, Public Participation in Decision-making and Access to Justice in Environmental Matters (Aarhus Convention) took place in Palais des Nations, Geneva from 18 to 21 October 2021.

It was held back to back with the fourth session of the Meeting of the Parties to the Protocol on Pollutant Release and Transfer Registers (Protocol on PRTRs) (22 October 2021).

The two sessions featured the Joint High-level Segment on 21 October 2021 where delegations focussed on the role of the Aarhus Convention and its Protocol in furthering sustainable infrastructure and spatial planning.

Marking the twenty anniversary of the entry into force of the Aarhus Convention, the events provided a platform for Parties, signatories, international organizations, civil society and other stakeholders to discuss achievements and challenges in addressing a wide range of topics relevant to the Convention.

The sessions resulted in a number of outcomes. Parties to both treaties and a wide range of stakeholders adopted the Geneva Declaration on Environmental Democracy for Sustainable, Inclusive and Resilient Development. The Meeting of the Parties to the Aarhus Convention also adopted respective decisions setting out priorities for future work by 2025 to advance the implementation of and compliance with the Convention. Among them the following:

- Guinea-Bissau was welcomed as the first-ever country from outside the ECE region to accede to the Aarhus Convention.

- The Aarhus Convention rapid response mechanism for the protection of environmental defenders has been established under the leadership of Austria and Ireland.

- 20 decisions on compliance with the Aarhus Convention have been adopted to assist individual Parties to improve their legislation and practice in such areas as oil and gas extraction, gold mining, nuclear power plants, renewable energy, power lines, urban and spatial planning, access to justice, litter, forestry and the safety of environmental defenders.

- Recommendations to promote the use of electronic information tools were adopted to support implementation of the Convention in light of countries’ transition to digitalisation.

- Several Parties offered to lead key work areas under the Convention: Republic of Moldova - for access to information; Italy – for public participation in decision-making; Belgium—for access to justice;  Austria—for genetically modified organisms; and France—for promotion of the Convention’s principles in international forums.

Information on election of the members of the Aarhus Convention Compliance Committees can be found here.

Information on election of the Bureau members can be found here

Information on side-events can be found here.

Please note below categories of documents:

1. Pre-session documents prepared in advance for the session:

These documents are reports on implementation and compliance and other background documents, prepared by the secretariat or subsidiary bodies of the Convention to provide a basis for discussion. These documents will be translated where feasible and reproduced by the Conference Service of United Nations Office at Geneva (UNOG) prior to the meeting.

Photos of the events are available here