With an estimated groundwater reserve of 60,000 billion m3 and a weak recharge of only 1 billion m3 annually, the NWSAS is essentially non-renewable in a human timescale. Population growth, urbanization, and accelerated economic activities caused water abstraction in the NWSAS basin to increase three times more than the natural recharge rate from 1980 to 2017 (from 0.75 billion m3 to 3.1 billion m3). 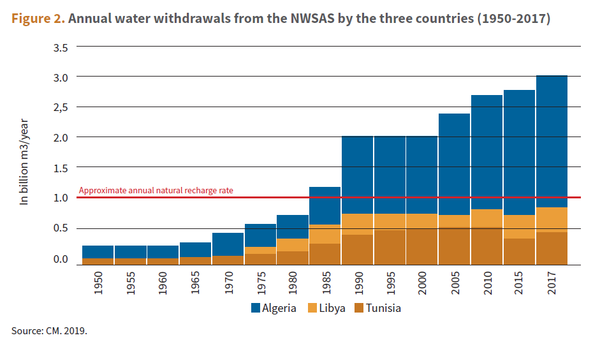 The steadily growing water abstraction, combined with high impacts of climate change that are likely to intensify, puts enormous pressure on this vital water resource. Over the last decades, it resulted in the overexploitation and depletion of the resource and the degradation of water and soil quality.

Strengthened cooperation is urgently needed from decision makers in the NWSAS Basin in order to meet these rising challenges. Following the release of a “nexus assessment” report  on the basin with specific recommendations,  the policy brief “The benefits of transboundary water cooperation in the North Western Sahara Aquifer System basin” issued today identifies the benefits of cooperation so far, to inspire additional cooperative actions to improve the sustainable development of the NWSAS Basin. It was developed through a participatory process involving the 3 countries, with support of the Water Convention and building on its guidance.

Dating all the way back to the 1960’s, cooperation on the transboundary water resources of the NWSAS Basin has progressively been strengthened and has been instrumental in the management of the shared groundwater resources. By 2008, Algeria, Libya, and Tunisia had succeeded in establishing a permanent tripartite consultation mechanism for the NWSAS, common database, hydrogeological model and monitoring network to evaluate the status of the basin and manage it. Based upon these cooperative measures, countries have been able to better develop informed water policies.

For instance, a mapping of vulnerable and high potential abstraction zones refrained from drilling boreholes near sensitive zones, such as e.g. chotts (shallow saline lakes). Better information on deteriorated boreholes has allowed countries to address leakage and reduce water wastage. One study also led to consideration of alternative water sources for the Djeffara region in Libya.

Cooperation on irrigation optimization is critical, as improving the efficiency of the irrigation system has the potential to save up to 47% of the water abstraction in the NWSAS area. Desalinated water for irrigation has been incorporated into the strategy of the Tunisian provinces of Gabes and Medenine. In Algeria, a new national plan for agricultural development   encourages water-saving modes of irrigation.

From the preservation of ecosystems to poverty reduction, the benefits of transboundary water cooperation are numerous and play a key role in achieving the Sustainable Development Goals. This rich history of successful collaboration can be built upon further to address the basin’s degradation, for the benefit of all cooperating countries. The policy brief also highlights the following potential benefits of further strengthening cooperation: