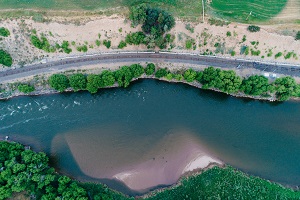 On 19 November 2018, the Foreign Affairs Council of the European Union (EU) adopted new conclusions on Water Diplomacy which underline the link between water, security and peace and promote accession to and implementation of the Convention on the Protection and Use of Transboundary Watercourses and International Lakes (Water Convention).

Council conclusions are adopted during each meeting of the Foreign Affairs Council of the EU. They are used to identify specific issues of concern for the EU foreign policy and outline particular actions to take or goals to reach. Already in 2013, the EU foreign Ministers had underlined that water is a foreign policy issue, given the growing tensions and conflicts over access to water, the deterioration of the world’s water resources and ecosystems and the increased threat of water scarcity.

These 2018 conclusions articulate a new approach to water which reflects increasing challenges (such as climate change or growing water insecurity) and the impact on EU water diplomacy of both the 2030 Agenda for Sustainable Development and the Paris Agreement on Climate Change.

The conclusions underline the importance of transboundary water cooperation, institutions and governance for peace and stability. Indeed, around 40% of the world’s population depends on transboundary waters. This makes water cooperation key for the prevention of conflicts, regional integration and prosperity. In this regard, the European Union encourages and supports all relevant stakeholders to develop transboundary arrangements and to set up institutional mechanisms designed to facilitate relations among riparian states. To this end, the conclusions stipulate that the EU will continue to promote accession and implementation to the 1992 Water Convention, serviced by UNECE, and to the 1997 Watercourses Convention.

Since its adoption, the Water Convention has provided an effective legal basis and political and technical platform for water cooperation, with very tangible results on the ground. The opening for accession by all United Nations Member States in 2016 therefore offers a tremendous opportunity to strengthen the multilateral response to transboundary water cooperation challenges.

The EU conclusions are available at: https://www.consilium.europa.eu/en/press/press-releases/2018/11/19/water-diplomacy-council-adopts-conclusions/