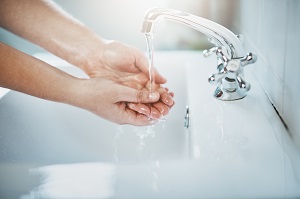 Ensuring equitable access must be central to efforts to realize the basic human rights to water and sanitation. However, despite significant progress in the provision of water and sanitation in the pan-European region, the latest data of the WHO/UNICEF Joint Monitoring Programme for Water Supply, Sanitation and Hygiene (JMP) shows that 31 million people do not have access to basic sanitation and 314,000 people still practise open defecation, majority of whom live in small rural settings. Furthermore, between 2000 and 2017, over 16 million people have yet to enjoy access to basic drinking water and over 48 million people do not have piped water at home. Countries of the region therefore still have a long way to go to meet equitable access targets of Sustainable Development Goal 6 (on clean water and sanitation for all) of the 2030 Agenda.

Indeed, for almost 10 years, the Protocol on Water and Health , which is jointly serviced by UNECE and WHO-Europe, has been supporting countries (in particular Armenia, Azerbaijan, Bulgaria, France, Hungary, North Macedonia, Republic of Moldova, Portugal, Serbia, Spain, Ukraine) in appraising - through self-assessments, and improving- via concrete actions, equitable access to water and sanitation at local and national levels.

As shown in the publication, the work on equitable access to water and sanitation carried out across the region shed light on remaining inequity challenges and access gaps often not discussed or not well understood because of a lack of data available. Geographical disparities, both in physical access and in price of water and sanitation services, are still important between rural and urban areas. Specific barriers faced by vulnerable and marginalized groups are also a common issue, and they often do not receive the attention they deserve. Affordability is also a growing concern. Finally, governance frameworks often lack specific equitable access targets and indicators which could help to track and address inequities.

In the region, countries have taken initiatives and implemented concrete actions to address these challenges, building on the findings of detailed assessments of the situation they undertook. In North Macedonia for example, several improvements took place, such as the renovation of toilets in village schools, the building of public toilets close to the main taxi station in Skopje and the renovation of toilets in many public institutions, now opened to the public and free of charge. In the Spanish municipality of Castello, seven public fountains have been installed to guarantee access to drinking water.

To address inequities challenges, some countries also opted for action at policy level to have a more informed decision making. This is the case of Armenia, where a specific action plan to improve equity (2018–2020) was endorsed: on-going work on identifying the legislative barriers to ensure equitable proposed the inclusion of a definition of vulnerable and marginalized groups in the Water Code. In France, a new law was adopted in 2013 to improve the affordability of water and sanitation services. In Bulgaria, the government is currently developing a regulatory framework to ensure sanitation in schools. In North Macedonia, local NGOs were mobilized to lobby future mayoral candidates to include actions in their programme activities that had been identified as part of the local equitable access plans developed at municipal level.

The work on equitable access have also allowed countries to raise awareness among diverse WASH stakeholders and beyond and enhance cross-sectoral cooperation– bringing together human right community, Ministries of education, justice, social protection, labour and enabling a common undertaking to make sure access is provided for all.

The Protocol on Water and Health will continue to support countries to improve equitable access to water and sanitation in its future Programme of Work (2020-2022) to be adopted tomorrow, during the last day of its 5th session of the Meeting of the Parties. About the Protocol on Water and Health

The Protocol on Water and Health is a legally binding instrument aimed at achieving adequate supply of safe drinking water and sanitation for everyone in the pan-European region, the Protocol, co-serviced by UNECE and WHO-Europe, puts a special focus on ensuring equity to make sure that “all members of the population, especially those who suffer a disadvantage or social exclusion” access water and sanitation services.

More information about the work on Equitable Access to Water and Sanitation under the Protocol on Water and Health: https://www.unece.org/env/water/pwh_work/equitable_access.html