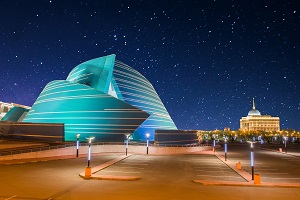 On 25 January 2017, a national round-table discussion on legal implementation of the UNECE Protocol on Strategic Environmental Assessment was held in Astana, Kazakhstan. Underpinning the round table was a legislative review prepared by UNECE experts, assessing the existing legislative framework of Kazakhstan vis-à-vis the requirements of the Protocol.

Based on the review of the existing national planning system and the environmental assessment of the strategic developmental plans and programmes, the UNECE review provided recommendations for aligning the national legislative framework with the provisions of the Protocol on SEA and outlined major steps to ensure a systemic and effective application of strategic environmental assessment (SEA) in Kazakhstan.

During the discussion, the value attached to SEA as a development tool by Kazakhstan was clearly stated: “There is a need to take a more effective, integrated approach during the planning and programming of development activities to ensure that environmental considerations and sustainable development goals are considered at the early stages of decision-making", said the Deputy Director of International Cooperation and Economic Integration Processes at the Ministry of Energy, Mr. Bekbergen Kerey, in welcoming remarks.

While recognizing that “significant work” to improve legislation and decision-making procedures remained before the country could ratify the Protocol, Mr. Kerey welcomed “the main findings and recommendations proposed in the draft legislative review”.

For UNECE, development of the draft review is only the first step in assistance to Kazakhstan with regard to SEA. UNECE stood ready to assist in the development of amendments to the legal framework, the development of guidelines and the building capacities of national planning authorities on the practical application of SEA. At the meeting, Ms. Elena Santer, a member of the secretariat to the UNECE Convention on Environmental Impact Assessment in a Transboundary Context and its Protocol on SEA, noted that "a comprehensive assistance programme could be designed to help the Government to ensure that its SEA procedures are developed in full compliance with the provisions of the UNECE Protocol on SEA and the EU Directive on SEA”.

The round table resulted in recommendations to the Government on further steps for establishing a national SEA system. Dr. Bakhyt Yessekina, a member of the Green Council under the President of Kazakhstan and Director of the Scientific Research Center “Green Academy”, who moderated the event, concluded the discussions noting that Kazakhstan had a well-developed planning system and sufficient institutional potential to set up the SEA system in the country.

Participating in the discussions were representatives of federal and local government bodies, including the parliament, the President’s office, the Ministry of Foreign Affairs, the Ministry of Agriculture and the Ministry of Industry and Development, the municipalities of Astana and Karaganda, environmental experts, industrial associations, and non-governmental organizations. The event was organized by the Ministry of Energy in cooperation with UNECE and the Scientific Research Center “Green Academy” in the framework of the Joint EU/UNDP/UNECE project, "Supporting Kazakhstan's transition to a green economy model".