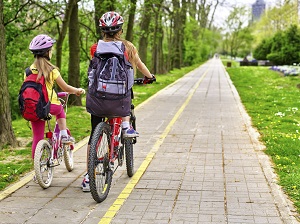 While others debate the merits of green economy, the Transport, Health and Environment Pan-European Programme (THE PEP) demonstrated once again its hands-on approach by hosting a green economy discussion that focused not on whether to implement green economy, but how to do it.

The Symposium “Contributing to economic development and stimulating job creation through investments in environment and health-friendly transport”, was held in the framework of the fourteenth session of THE PEP Steering Committee, on 7 November 2016 at WHO Headquarters in Geneva.

Just days after the entry into force of the Paris Agreement, on 4 November, and in a period full of discussion on how best to implement the 2030 Agenda for Sustainable Development, participants received some concrete leads on implementing the green economy. The information presented the main findings from the forthcoming THE PEP report, “Riding towards the green economy: cycling and green jobs”.

The report estimates that 435,000 new cycling-related jobs could be created if the 56 cities studied had the same modal share as Copenhagen — a major increase over previous estimates. It also reflects a broadened understanding of cycling-related jobs, which includes services using bicycles such as messengers, taxis, logistics, deliveries, bicycle hire schemes and parking.

The study also highlighted that investing in cycling increases the number of cycling-related jobs, as more cyclists need more accessories, maintenance, repair and infrastructure support. Cycling tourism also emerged as an interesting trend and source of new jobs. For example, in Austria, 70 per cent of new jobs in cycling come from cycling tourism, and 47 per cent for France. Furthermore, indirect jobs (those in other sectors such as accommodation and food) and induced jobs (those created when the overall level of spending in the economy rises) can also be potentially significant.

What also makes this THE PEP study significant is that much of the data was gathered from the bottom up, directly from cities and their authorities. Indeed, the study concluded that more consistent data is needed; in fact, data is often not directly available. Moreover, collating data for some types of jobs is easier than others and data on jobs associated with tourism is particularly difficult to assess.

Speakers and participants at the Symposium agreed that THE PEP should continue to broaden the evidence base for cycling and active transport; advocate for cycling-friendly policies and related green jobs; and support member States with tools and training.

The study was undertaken as part of a THE PEP Partnership project, undertaken jointly by UNEP, the WHO Regional Office for Europe and UNECE.