The Republic of Kazakhstan and the Kyrgyz Republic share the waters of transboundary Central Asian rivers Chu and Talas, which provide essential resources for irrigation of the vast agricultural lands in both countries as well as opportunities for the generation of hydropower. Whereas all facilities for rivers’ regulation, such as dams, water reservoirs and canals, are located upstream in the territory of Kyrgyzstan, Kazakhstan depends on the operation and proper maintenance of these facilities. This situation prompted the two countries to establish a legal basis for the joint operation of water management infrastructure. In January 2000 the Agreement on the Use of Water Management Facilities of Intergovernmental Status on the Rivers Chu and Talas was signed by the Government of the Republic of Kazakhstan and the Government of the Kyrgyz Republic (Rus, Eng). The Parties agreed that operation and maintenance costs for the facilities specified in the Agreement would be shared on a pro rata basis in accordance with the water volume received by each Party. Under Article 5 of the Agreement, the Parties committed to establish a permanent commission to determine the operation mode for water infrastructure and the share of each Party in funding operation and maintenance costs. The Agreement became effective in February 2002 upon ratification by the Parliaments of both sides. 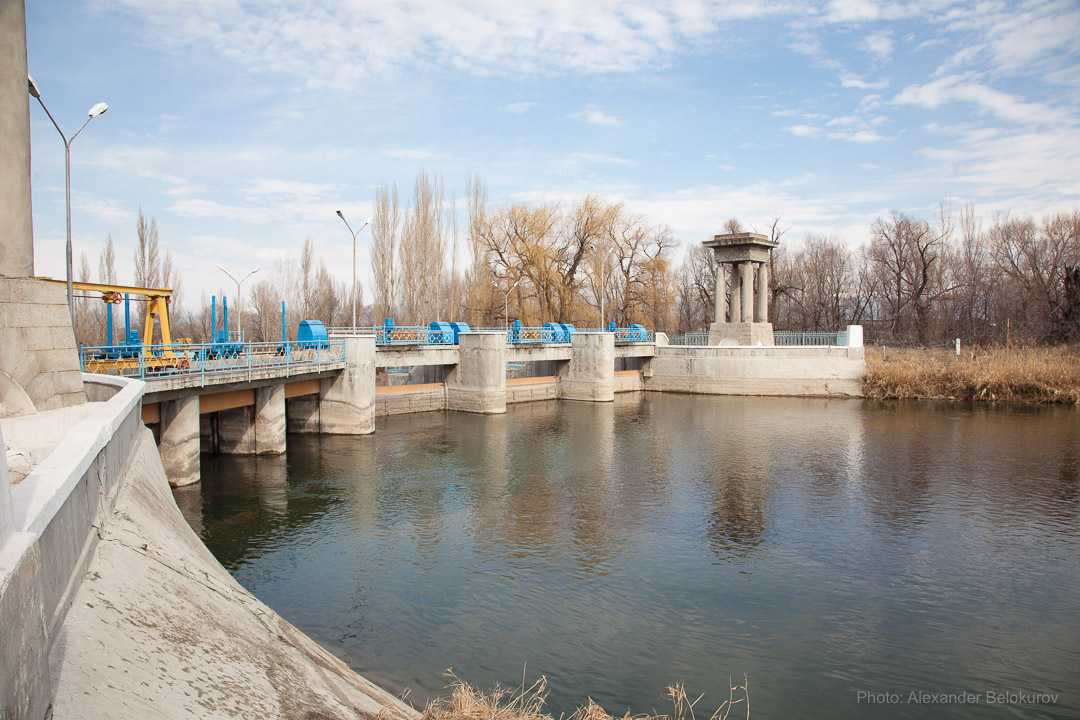 In 2003 OSCE, UNECE and UNESCAP initiated the project "Support for the Creation of a Transboundary Water Commission on the Chu and Talas Rivers between Kazakhstan and Kyrgyzstan" (Chu-Talas I) with funding from the United Kingdom, Sweden and Estonia. The project facilitated the establishment of a bilateral Commission in 2006. In particular, the project allowed developing the Statute of the Commission (Rus, Eng). The main activities of the Chu-Talas Commission focus on (a) approval of water resources allocation in the Chu and Talas river basins between Kazakhstan and Kyrgyzstan; (b) determination of measures to maintain water facilities of inter-State use and provide for their routine and capital repair; and (c) approval of a financing plan for the above measures. The final project report can be accessed here (Eng).

The establishment of this sustainable coordination structure, that includes a permanent secretariat as well as experts and working groups, enabled joint and transparent decision-making on water allocation and maintenance costs by the two Parties, as well as relevant information sharing, efficient implementation of joint projects, prevention and rapid settlement of problematic situations in the Chu and Talas river basins.
The follow-up project “Developing cooperation on the Chu and Talas Rivers” (Chu-Talas II), funded by Finland, was implemented by OSCE and UNECE in 2008-2011. The project’s goals were to broaden the bilateral Kazakhstan-Kyrgyzstan cooperation, enhance the understanding of the two countries on the available water resources, improve access to information, involve new stakeholders into the process of river management and promote activities for the protection of water ecosystems.

The practical outcomes of the Chu-Talas II project included the development of proposals to improve the 2000 Agreement by inclusion of additional water facilities, introduction of integrated water resources management principles, and establishment of basin councils. The project raised awareness of the work of the Commission through the new official web-page and local media. In 2008-2009 the Commission carried out a joint examination of water management facilities. As a result, damage evaluation acts were prepared on the technical condition of the main waterworks along with needs assessment for repair and rehabilitation works for the following years. In addition, a joint study on the relation of groundwater and surface water resources in the Chu river basin was prepared. These results are displayed in the Project Report “Development of cooperation on the Chu and Talas Rivers (Chu – Talas II)” (Eng). More detailed information can be found in the extended version of the report (Eng).

In 2012-2015 UNECE has supported the Chu-Talas commission in the safety work on the Kirov and Orto-Tokoi dams.

The Chu and the Talas Rivers are the major sources of water in agriculture and support the livelihoods of more than 3 million people in Kazakhstan and Kyrgyzstan. The Chu-Talas River Basin is highly vulnerable to climate change and the overall growth of aridity and the declining availability of water resources are the most likely and serious im¬pacts of climate change in the basin. As a result of the forecast¬ed climate change, glaciers in both basins may be fully exhausted by 2100. Regulation of flows of the Chu River between Kyrgyzstan and Kazakhstan is an issue already today. To prevent potential conflicts over the dwindling water resources due to climate change, it is important to apply a transboundary approach to climate change adaptation.

The project “Promoting Cooperation to Adapt to Climate Change in the Chu and Talas Transboundary Basin” (January 2010 - December 2014) aimed to improve the adaptive capacity of Kazakhstan and Kyrgyzstan, to support dialogue and cooperation on the needed steps to design an adaptation strategy in the transboundary context and thereby prevent controversy on the use of water resources. Its specific objectives were: Results of the project are summarized in the brochure “Strengthening cooperation in Adaptation to climate change in transboundary basins of the Chu and Talas rivers. Kazakhstan and Kyrgyzstan”, available in English and Russian. 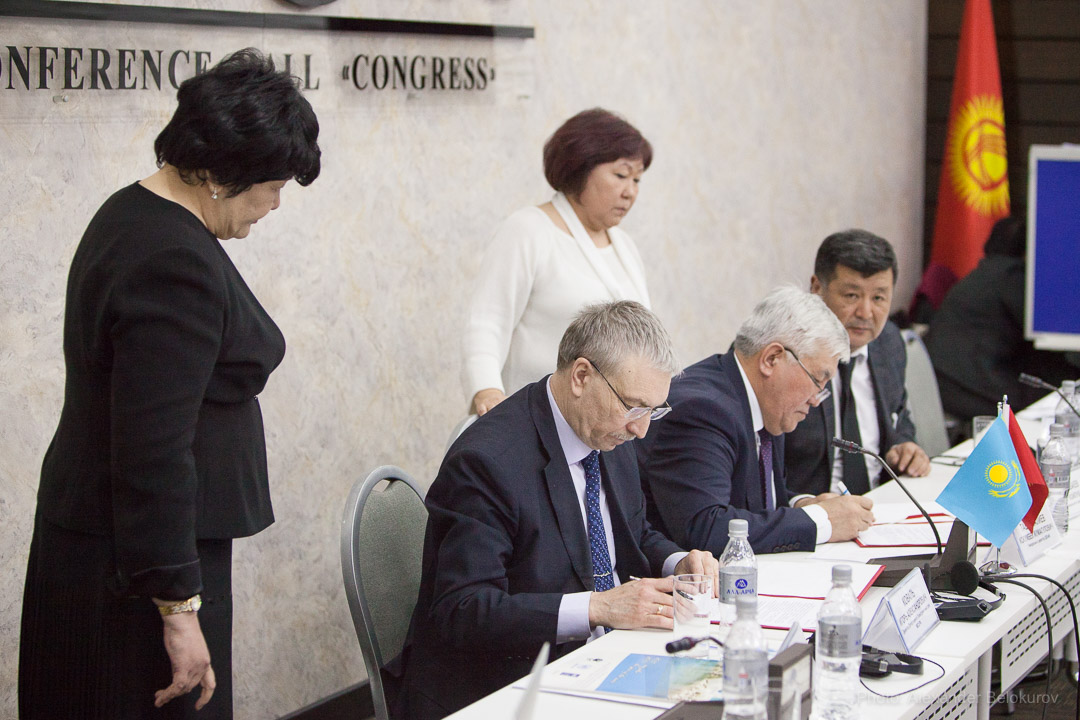 The purpose of the project “Enhancing climate resilience and adaptive capacity in the transboundary Chu-Talas basin” (September 2015 – December 2018), funded by the Finnish Ministry for Foreign Affairs under the FinWaterWei II Initiative, is to establish a framework for regular and strategic climate change adaptation action in the Chu-Talas River Basin and enable the Chu-Talas Commission and local authorities to facilitate climate change adaptation in the basin. Based on stakeholder consultations the expected project results are:

Following the adoption of the strategic decision to cooperate closely with the GEF/UNDP project on Enabling Transboundary Cooperation and Integrated Water Resources Management in the Chu and Talas River Basins the project has provided extensive inputs to the Transboundary Diagnostic Analysis (TDA) and Strategic Action Programme (SAP) processes, and developed the TDA annex on climate adaptation.  Specific project contributions included expert inputs supported by relevant background documents on climate projections and scenarios, organising discussions and dedicated sessions during Chu-Talas Water Commission meetings, training provided for experts involved in drafting the TDA and SAP. The SAP document was presented and accepted during the 24th Session of Chu-Talas Water Commission on February 27, 2018. 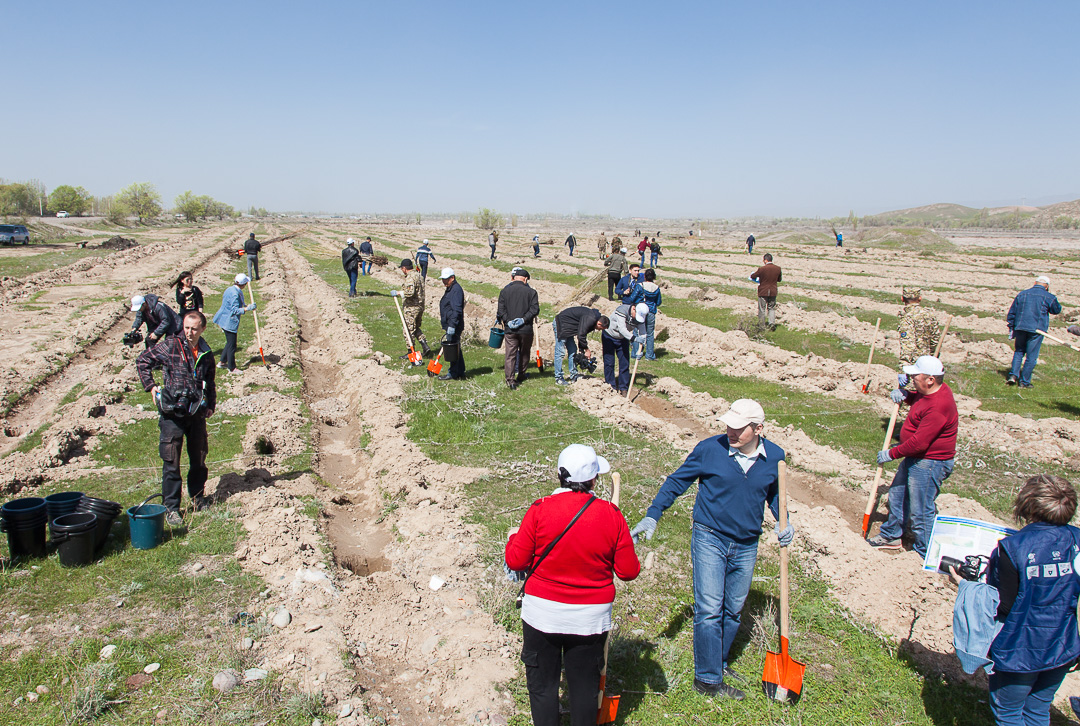 The project also proposed, in consultation with local stakeholders, a set of adaptation measures, covering broad range of issues from water quality to monitoring and education, that were assessed against their cost/effectiveness and prioritised.

Following discussions within the Working Group on Adaptation to Climate Change and Long-term Programs of Action of the Chu-Talas Commission, the following measures were selected by the project team for the pilot implementation: 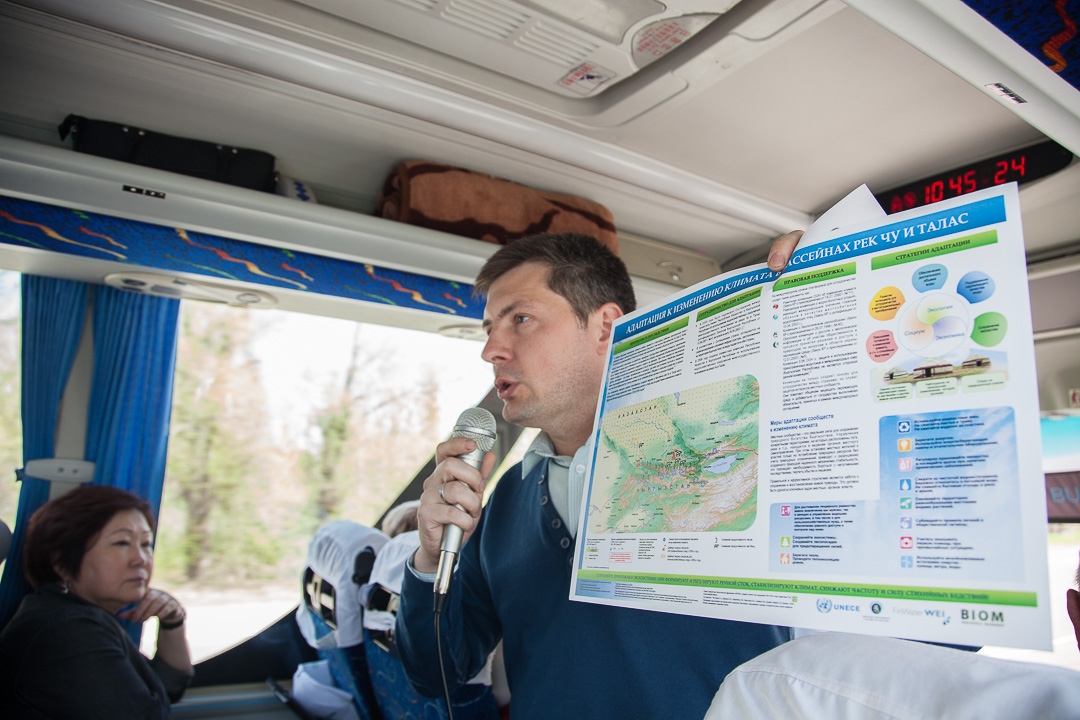 The project teamed up with the local NGOs Kyrgyz Association of Forest and Land users on implementation of the pilot adaptation measures.

The local NGO BIOM is facilitating awareness raising and information campaign that includes preparation of information materials, trainings for local communities, press-tour and other important activities.

The brief summary of the project results in the relevant brochure in English and Russian.