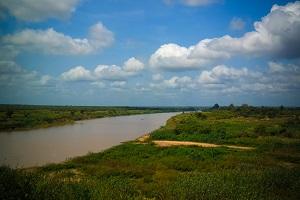 Ghana’s transboundary river basins, namely the Volta River basin (shared with Benin, Burkina Faso, Côte d’Ivoire, Mali and Togo – home to over 23 million people, with a population projected to more than double by 2050), Bia and Tano Rivers (shared with Côte d’Ivoire) and Todzie-Aka basin (shared with Togo), cover over 75% of the country’s land surface and generate around 80% of freshwater flow. These shared water resources provide water for drinking, sanitation, agriculture (which accounts for between 54 and 85% of employment in Volta basin countries), hydropower, and industrial needs.

On 21 May 2021, Ghana officially launched its National Implementation Plan for the two Conventions. The event, co-organized by the Water Resources Commission of Ghana and the Secretariat of the Water Convention, aimed at presenting the detail of the actions, measures of the Plan, a timeline and resources required. Several partners, including the Embassies of France, Germany and Hungary, the Swiss development cooperation as well as the Executive Director of the Volta Basin Authority attended the event.

The Water Convention Secretariat (UNECE) supported Ghana in developing the Plan, with the financial support of the European Union. The Plan was developed through a participatory consultation process which involved the relevant stakeholders in the water and environment sectors. The application of the Plan is expected to support the implementation of integrated water resources management at transboundary level by addressing priority problems including climate change, water availability (both quantitatively and qualitatively), and extreme events that are specific to each of the shared basins; to help improving the existing intra and inter sector-wide collaboration and coordination; to develop clear procedures of data sharing arrangements related to water and waste-water discharges, environmental conditions, and planned measures/developments.

Mr. Ben Ampomah, Executive Secretary of the Water Resources Commission, and Water Convention Focal Point stated that “There are significant socioeconomic interdependencies, extreme events and occurrences between Ghana and its riparian neighbours that call for urgent action to deepen existing cooperation. Therefore, for Ghana as a party to the Water Convention, a well-articulated and efficiently executed Implementation Plan that will fulfil the country’s key transboundary obligations and address its international and national concerns, is of essence and is vital to achieve the SDGs”.

Ms. Sonja Koeppel, Secretary of the Water Convention said “The two United Nations Water Conventions provide a perfect package helping countries to cooperate over shared waters, prevent conflicts and promote regional integration. I very much welcome that Ghana has, as first African country, developed an implementation plan which will help the country to actually make use of the two Conventions and benefit from them but also to better achieve the SDGs and in particular target 6.5. I therefore encourage other actors, partners and donors to support Ghana in the implementation of the national plan”.

An increasing number of countries, including Burkina Faso, Côte d’Ivoire and Togo – with which Ghana shares its basins – are seizing the institutional and legal frameworks of the global Water Conventions to facilitate concrete efforts for cooperation on shared water resources.