Countries in the eastern UNECE region can play a leading role in CO2 storage, according to new study 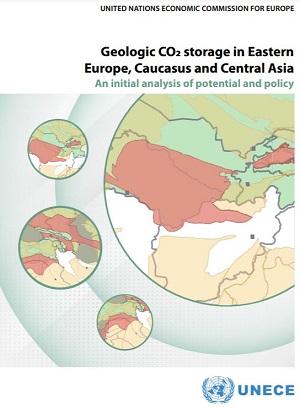 Countries of Eastern Europe, the Caucasus and Central Asia host significant potential for CO2 storage. Using publicly available data, the analysis by geological experts identifies for the first time storage potential in oil reservoirs in excess of 62,000 million tonnes (Mt) of CO2  in the eastern part of the UNECE region with 56,410 MtCO2 in Russia alone, according to a United Nations study published today.

Deep saline aquifers, depleted oil and gas fields, unmineable coal seams have been found suitable for CO2 storage. More recently, the possibility of storing CO2 in basalt has been proposed. The study looked at the first two options (aquifers and oil reservoirs) and identified 17 suitable fields in the region.

In the Russian Federation, storage capacity has been identified in the Volga, Western Siberia and Yamal regions with combined storage potential of over 10,000 MtCO2 in oil reservoirs. Smaller suitable carbon sinks were also identified in Kazakhstan, Turkmenistan, and Azerbaijan.

Existing sources of CO2 are very often not sited in the vicinity of storage sites. To illustrate this issue, the total storage capacity that is ‘matched’ to CO2 sources was assessed at only 13,000 MtCO2 through Enhanced Oil Recovery (EOR) and 1,100 MtCO2 in aquifers.

The study was commissioned to support the exploration of alternative decarbonization strategies and to help countries in the UNECE region deploy carbon capture, use and storage (CCUS) technology.

Carbon capture, use and storage describes several processes for capturing CO2 emissions from industrial processes and fossil power generation and either storing it deep underground or re-using it. In its earlier report published a few weeks ago, UNECE  emphasized the urgent need for CCUS to be deployed, calling it “key to achieving carbon neutrality”.

Getting to net-zero emissions would require eliminating 90 gigatonnes (Gt) of CO2 emissions across the UNECE region within the next 30 years.  At present, CCUS is not on track to fulfil its projected role in climate change mitigation. Worldwide, 19 operating CCUS facilities are injecting and permanently storing about 40 MtCO2 annually. Massive scale up would be needed to achieve the level outlined in the IEA’s Sustainable Development Scenario, which projects thousands of CCUS sites injecting and storing 1.5 gigatonnes (Gt) per annum.

Enhanced Oil Recovery as a catalyst for CCUS implementation

Today, EOR is carried out only until the tipping point at which CO2 costs exceed the revenues gained from recovering extra oil. Yet EOR could be used to a much larger scale, increasing the volume of CO2 injected so that emissions linked to the additional oil produced are partly or fully offset.

In the United States, for example, for every barrel of oil currently produced, ~0.3-0.4 tonnes of CO2 (tCO2) are injected and stored while combustion of oil releases 0.4 tCO2 to the atmosphere. The IEA estimates that operations aiming to co-exploit oil production and storage, what it called “Advanced EOR+”, could bring CO2 utilization to ~0.6 tCO2/bbl, or even to 0.9 tCO2 when the focus is on storage.

This suggests that EOR may have an important role during the initial phases of CCUS development, especially since oil revenue from EOR offset some of the cost associated with CO2 storage, making it economically viable.

The study estimates that adoption of EOR throughout the region would require CO2 supply prices in excess of $60/tCO2 when oil prices are in the order of $50/bbl.

The study calls for development of appropriate policy mechanisms that could support rapid CCUS deployment in the region. Multilateral institutions such as UNECE are essential for the development of a policy framework by facilitating inter-regional cooperation and securing long-term industry and government environmental commitments. The study argues for the establishment of a new policy mechanism supporting the deployment of CCUS based on creating value by storing CO2 in geological sinks. The proposed approach would be based on a certification scheme for tradable carbon storage units, each representing a tonne of CO2 securely stored in a geological reservoir. The trading of carbon storage units stored would support CCUS deployment and create market mechanisms for climate change mitigation.

Experts are wary of the incomplete knowledge of storage potential and limited policy action on CCUS. “We need to conduct an in-depth assessment of basins suitable for CO2 storage that is based on a globally-accepted and clear definition of storage potential. We need smart and novel policies to support CCUS deployment in the region” said lead author and CCUS expert Wolfgang Heidug.

“This report highlights the critical role that UNECE plays in mobilizing countries to act in making Agenda 2030 for Sustainable Development a reality and delivering the green recovery we need. More political support from member States is urgently needed to build upon this initial research” said UNECE Executive Secretary Olga Algayerova.

“This research is a welcome addition to the rising global interest in carbon storage. Nations must now work beyond borders to support storage clusters, and further east-west cooperation before it is too late” said Jim Robb, Chair of UNECE Group of Experts on Cleaner Electricity Systems and President and CEO of North American Electric Reliability Corporation (NERC).