A new report from the United Nations warns that time is running out to deliver on the Paris Agreement and the 2030 Agenda for Sustainable Development and calls for rapid deployment of carbon capture use and storage (CCUS) to meet carbon neutrality targets.

Carbon capture use and storage (CCUS) is the process of capturing carbon dioxide (CO2) emissions from fossil power generation and industrial processes for storage deep underground or re-use. CCUS comprises a vast portfolio of existing technologies that are economically viable.

Large scale deployment of CCUS technology in the UNECE region would allow countries to decarbonise the energy sector and hard-to abate industrial sectors in the medium term to bridge the gap until next generation low-, zero-, or negative- carbon energy technologies become available to meet the goals of the Paris Climate Agreement.

The quantity of CO2 removal needed to achieve carbon neutrality far exceeds what current CCUS technologies could deliver, so CCUS investments must be seen as part of a broader portfolio of actions to avoid the unacceptable consequences of climate change, alongside deploying low or zero carbon technology and enhancing the capacity of natural carbon sinks such as forests, wetlands, permafrost and oceans.

The Technology Brief published today looks at the various technologies available to capture (at source from industries, such as cement and steel, hydrogen production from fossil fuels, incineration of waste or power generation; from Biomass energy or directly from the air), store (in aquifers or through Enhanced Oil Recovery) and use (in mineralization, chemical or biological processes) CO2. It provides an overview of 31 existing CCUS projects in Europe and 24 in North America. 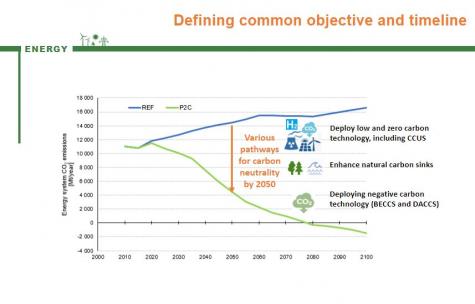 “This technology brief is a positive step in enhancing global understanding of the implications and opportunities of moving towards carbon neutrality across the power and energy intensive industries by 2050” said Acting Executive Director of the United States Energy Association, Sheila Hollis.

Scandinavia, the United States and the United Kingdom lead the way in CCUS readiness, with these countries developing pilot projects and adopting needed regulatory frameworks. Smaller nations in the UNECE region seek international partners and financing to make CCUS a reality as they balance their climate objectives with their development imperatives.

“Strong political will is needed to make affordable, clean, reliable, sustainable and modern energy for all a reality by 2030” said UNECE Executive Secretary Olga Algayerova. “As we prepare for the High-level Dialogue on Energy convened by the UN Secretary-General under the auspices of the UN General Assembly in September, UNECE is committed to supporting member States make 2021 the year of real action on energy”.

The Brief notes that large scale deployment of CCUS will require vast geological storage capacity. At present, known suitable sedimentary basins in the UNECE region have been identified in North America and Western Europe, namely the UK, the Netherlands and Norway. UNECE is preparing a study on the potential for storage in Eastern Europe, the Caucasus and Central Asia - in particular in the Russian Federation (Volga Urals, West Siberia, Caspian subregion), Kazakhstan, Azerbaijan and the Caspian Sea.

The brief addresses the cost of CCUS, which is perceived as one of the main barriers for project development. Experts evaluate that for Europe alone the cost of CCUS deployment planned to 2050 could amount to 320 billion euros and needed transport infrastructure could add a further 50 billion euros. The speed at which costs can be reduced will drive deployment at scale.

The brief highlights the need for acting at scale and urges nations to collaborate to improve the cost-effectiveness of large clean-energy infrastructure projects. Sharing best practices in both technology deployment and regulatory and policy infrastructure is needed to support long-term industry and government environmental commitments.