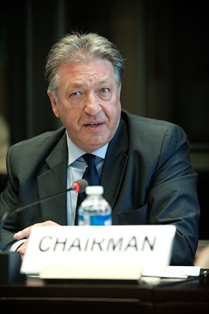 The 64th Commission (29–31 March 2011) elected its new Bureau, with Serbia as Chair and Israel and Romania as Vice-Chairs.

Ambassador, Head of the Mission of the Republic of Serbia to the United Nations and other international organizations in Geneva, Switzerland.
Mr. Zvekić, born on 2 August 1950 in Belgrade, has a law degree and a PhD in sociology. He was a Fulbright scholar (1973-75) and then worked in the Institute for Criminological and Sociological Research in Belgrade from 1976 to 1984 when he joined the United Nations Crime and Drugs Programme.

He has published extensively on crime and development, and reform of the criminal justice system from the perspective of human rights and international standards. He has taught in many academic institutions worldwide.